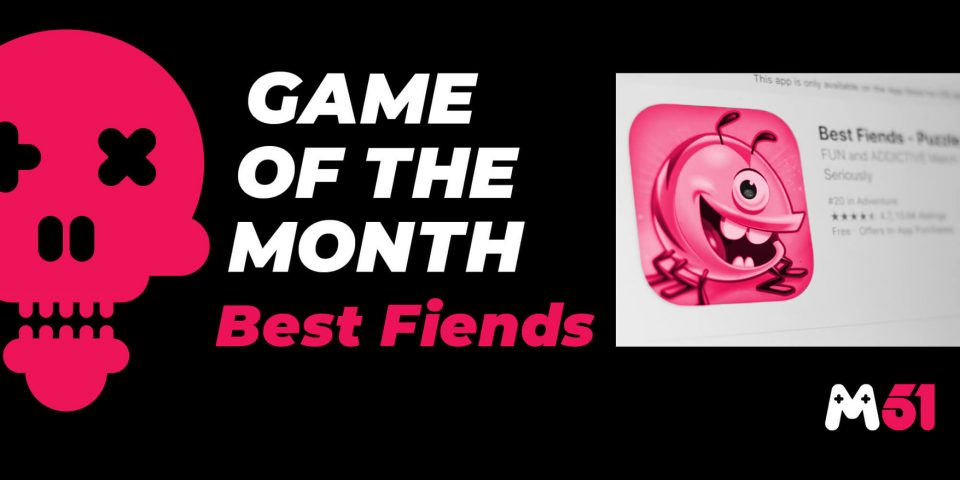 Aaaaaaaaand I’m back with the ‘Game app of the month’ post! I know you’ve all been eagerly awaiting it because let’s face it: who likes to do anything when they can rest their lazy ass on a comfortable couch or chair and game on their smartphone? (hint: me). If you’ve missed my previous post, let me just quickly explain what the idea is here.

As gaming is my bread and butter, I am lucky (and/or privileged) to frequently mix business and pleasure. This means that every once in a while, I’ll stumble upon a mobile game that impresses me so much that I just have to share it with you (I am kinda like a teenager on social media that way). Why do I do that? Because the games I write about are fun and arguably great, and I see no harm in spreading the word about them.

So, let’s dive into this month’s game: Best Fiends.

Best Fiends is an insanely popular casual puzzle game with over 3,000 levels and RPG-like character development. It was created by Seriously Digital Entertainment Ltd. (recently acquired by Playtika for some serious cash) back in 2014, has close to two million daily active users, and has been downloaded almost 100 million times. You can play it on your computer via Facebook or on your Android, iOS, and Fire OS mobile device.

The game also has a sequel called Best Fiends Forever if literally thousands of levels aren’t enough for you.

The story takes place in an imaginary land called Minutia. You are helping the Best Fiends to defend it from Slugs, the previously peaceful creatures that were exposed to strange mutations after a meteor crashed into Mount Boom. The Slugs have wreaked havoc ever since, munching all the greenery and leaving a trace of slime wherever they go.

Best Fiends starts you off immediately – it’s clear what you need to do and why you’re doing it. The mechanics are simple to understand and master. The task at hand is to connect as many of the same items on the screen as possible in order to achieve a certain objective.

The objectives can vary – from defeating Slugs to freeing your fellow Fiends to collecting various special objects. Things are made interesting by adding new and useful items like bombs and other powers courtesy of specific Fiends.

What makes the game great

The success of the game can be traced back to a lot of things. Great design and colors are a must and Best Fiends delivers here with a slightly cartoonish feel, cute sound effects, and a very cool 3D roll map.

It’s a well-polished game and even though it’s a familiar match-three type of game similar to Candy Crush Saga, I always felt Best Fiends is more like a strategy game disguised as a puzzle. This is not just another matching game: the game requires a bit of strategy to defeat the Slugs as it encourages you to use your brain along instead of just incessantly connecting same shapes.

You need to think a few steps in advance to progress on to the next level as matching sometimes can be quite long and require thinking it over for a bit. Arguably, this aspect is a large part of why the game is so enticing, at least to me.

Along with the puzzle elements, there’s a distinct role-playing side thanks to some great storytelling. RPG character development provides just about enough of an immersive experience to keep you addicted for days, not just hours. Don’t worry – you can play at your own pace.

The first few levels are very basic and simple (the game really starts to gear up after level 5), easing you in to understand the gameplay. You might even think it’s a kids game – it’s not. A lot of adults play it and the more you go on, the tougher it gets. The game is challenging enough to keep you interested but not too difficult to drop it. I think PC Mag’s description as an “addictive result of a one-night stand between Angry Birds and Candy Crush” perfectly describes it.

It’s also important to notice that while slowly treading into its fifth year of existence, Best Fiends isn’t sitting on its laurels. Seriously is constantly adding more content, be it events, challenges, levels, and characters to keep things fresh. In addition, there are a lot of gifts and surprises throughout the game like quality animated videos of the characters life and mini games, all of which lead to some delightful psychological fun and satisfaction.

Just how successful is this game? Let’s just say that the maker of the app had its biggest year in 2018 with 65% increase in year-on-year revenue growth, resulting in $69 million in 2018 largely due to Best Fiends. In fact, the entire franchise now stands at $175 million. Whether the game is or isn’t your cup of tea, you have to admit those are some serious numbers.

The fact that the people behind Best Fiends – originally a small portion of Rovio executive team that broke away in order to start their own company – have previously worked on Angry Birds games that accumulated more than two billion global downloads can also be attributed to the success of Best Fiends. It’s always easier if you have people who know how to deliver, isn’t it?

One thing I noticed is that while Best Fiends is free to download and play (with in-app purchasing), the quality of the game is superb. In fact, it’s much better than some other free games so even from that angle, it can’t hurt to give it a shot even if you are not into mobile games – I guarantee you won’t be disappointed. Just don’t hold me accountable for losing time on it!

That would conclude this post and a short introduction of Best Fiends. Stay tuned for my October pick, I promise it’s going to be a good one.

I have only one more thing to say to you: don’t let the Slugs win!