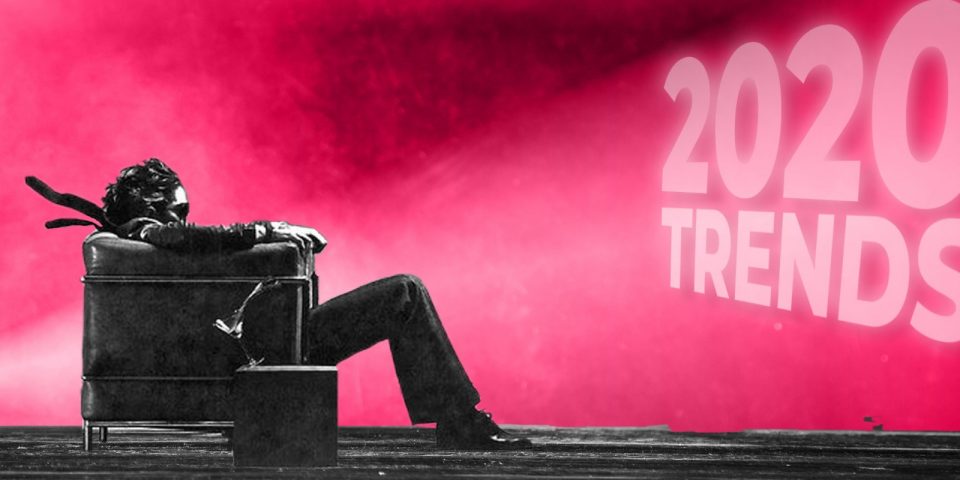 In 2019 the world’s entertainment media giants fought a bloody war to dominate Smart TV screens in millions of living-rooms across the US.

In this post, I will reveal the winners and the losers – and outline the 10 major video entertainment trends leading the charge into 2020:

More than half of the US population (55.3%, to be precise) already have a video streaming subscription. The popularity of these platforms for “cord-cutters” – as these former cable loyalists are known – stems from the fact that they offer subscribers nearly-limitless and instant access to original and on-demand high-quality TV shows, films and documentaries. All they need is broadband internet.

Let’s not forget other perks such as the affordable cost – HBO on cable can cost up to $130-a-month – a multi-device experience, and – also unlike cable – the ability to cancel any service, at any time, at the click of a button. By contrast, cable operators famously made it “challenging” to unsubscribe. So while it stands to reason that the tsunami of “cord cutters” will only increase – so will the numbers of subscribers cancelling one streaming service for a better priced and better quality competitor.

The “Streaming Wars” were the 2019’s Big Story. Cable was the first casualty. Could the reigning champ of streaming video be the next?

The moment Disney+ was announced as a $6.99-a-month streaming service (4K included), Netflix’s unrivalled dominance started to evaporate. For one, it charges $15.99 for the equivalent premium service. Not only did Disney remove its highly-watched shows from Netflix – it then built an unbeatable launch line-up of shows from Marvel, Pixar, Star Wars and National Geographic. For a premium, Disney Plus also throws in ESPN and Hulu.

But Netflix’s problems were only beginning.

NBC had also announced its streaming platform – which the chart-topping show “The Office” would be leaving Netflix. And let’s not forget the people who most recently revolutionised TV, HBO. The most profitable content maker in the world has a deeper library than most of its rivals, and a recent record-breaking Emmy season. Will CEO Richard Plepler’s “HBO Now” disrupt yet-another TV market? It’s pricey at $15-a-month – but a cheaper ad-supported option is on the way.

And so, almost overnight, Netflix’s monopoly was over.

Expect the trend of major networks and studios launching their own direct-to-consumer streaming services to continue into 2020. Viewers will win on variety, but will they pay the heavy price for multiple subscriptions?

As more streaming platforms enter the market and try to entice price-sensitive viewers, the question for both publishers and viewers is this:

Will the subscription model, as we know it, still be sustainable?

It’s difficult to imagine viewers paying $30 for a bouquet of subscriptions when they’re used to paying $8.99 for the most basic Netflix service. Or $0 for YouTube and PopcornTime.

While Netflix’s subscription model might still be the most successful, Roku’s meteoric success and its 32.3 million active users indicate that the future is invariably a hybrid ‘freemium’ model.

Viewers will likely handpick a few premium subscriptions, while satisfying their inexhaustible hunger for entertainment with free, ad-supported content on premium channel networks like Swifti TV.

HBO, which is far more profitable than Netflix, spent $5 billion while Apple and Amazon, eager to catch up, are spending $6 billion each. The other networks studios WarnerMedia and NBCUniversal.

So, licensed content, increased competition, and quite possibly lower prices will drive demand for originality and exclusivity as the two pillars of sustainable competitive advantage. In other words, Netflix and others will have to invest more in order to fend off new, powerful competitors and if possible, grow their viewership in new mega-growth markets such as India.

While insufficient data network infrastructure prevents stronger market growth, advancements in OTT technology have boosted the growth of OTT services in the fast-growing Asia-Pacific market, excluding China whose industry alone is set to top $16 billion by the end of 2019. PWC predicts global OTT market will hit a tipping point in 2021, when Asia-Pacific will overtake North America as the world’s biggest region in terms of OTT video revenue, and that says a lot.

The Rise of Documentaries

Despite attention spans dwindling and audiences’ insatiable appetite for short-form videos, two documentaries about the infamous Fyre Festival and a host of others (Leaving Neverland, Apollo 11, etc.) that became massive hits in 2019 heralded the return of documentaries. In no time, Netflix was flooded with beautifully produced investigations of nutrition, health, war, politics and just about every niche under the sun.

2019 was arguably a great year for documentaries that are well-suited to on-demand viewing. In 2020, we can expect major networks and streaming services to continue the trend in their efforts to produce original content.

The subject of original content will be a recurring topic as audiences are increasingly looking outside the US for new films and TV shows. Netflix’s third most-watched show during the October 2018 – September 2019 period was ‘La Casa de Papel’, a Spanish show that was viewed by 44 million people. Another Spanish series ‘Elite’ rounds up the top 10 list, while German series ‘Deutschland 83’ is one of the top viewed Amazon Prime series this year.

These examples, along with localized content (Indian ‘Sacred Games’ is the most-watched series in India on Netflix) prove that good shows can come from anywhere. They also prove that Netflix’s slick subtitles and audio translation features (copied by Amazon) were an unforeseen game-changer. They not only brought international shows into US homes but also funded a new wave of international content makers and audiences. With more and more global subscribers, expect to see more international content to satisfy global viewers.

In the battle to pull ahead in this new entertainment landscape, talent is a highly sought-after commodity. In the aftermath of Disney+, the proverbial tug of war between Hollywood and streaming giants has disrupted how actors, writers, producers, and others are approached and dealt with.

The bottom line is: it’s an open market out there and everyone is up for grabs.

There have been numerous talent acquisitions, some more aggressive than others. I fully expect that trend to continue, whether it’s because of a big paycheck, promise of creative freedom and risk-taking, or just finding a voice that fits a brand.

NBCUniversal did an interesting thing in 2016: it launched Hayu, a subscription-based video streaming service that focuses solely on on-demand reality television content. While we won’t see an outbreak of all-reality services any time soon, streaming reality TV content will become more present.

In fact, Netflix already has a pretty good assortment of reality shows, if not terribly popular ones, with the rest following suit. Combining OTT’s surge in popularity and a seemingly insatiable thirst for reality television, there will be more of said content.

Last but not least, mobile streaming will stay strong in 2020. Historically speaking, mobile viewing was a major contributor in the streaming video boom so this is one of those trends that will go on for a while due to the level of convenience and immediacy. OTT can reach customers at any place and time and on any device. As that isn’t going to change anytime soon, neither will mobile streaming go out of style, especially with 5G becoming more widespread.

Those would be my top 10 trends that will mark 2020. It’ll be fun to see how many of them I get right. Until then, cheers!