Close all the doors except for one but open the windows 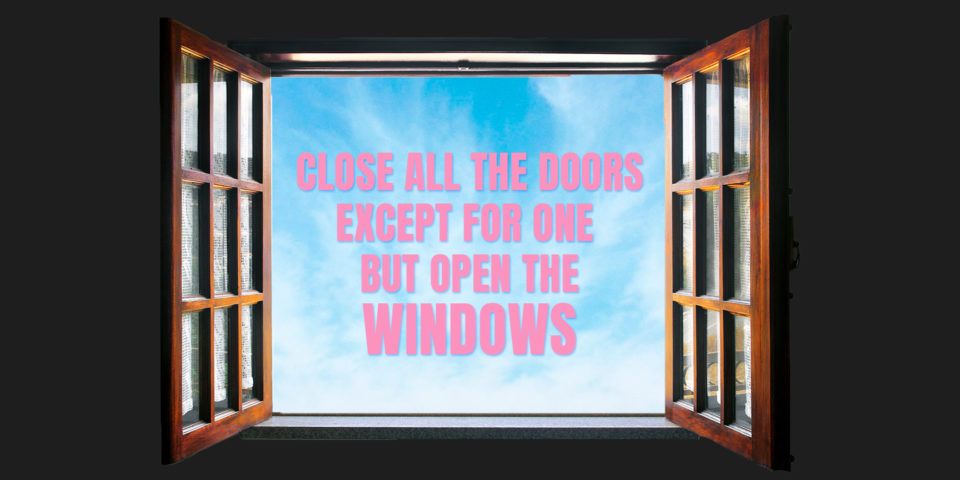 I’ve noticed something peculiar. One of the things that really stops entrepreneurs from growing is the fear of absolute commitment to who they are and what they do.

It’s like they haven’t come to terms with the decision of being entrepreneurs through and through. They tend to be really good at it but are also scared to go all-in, which represents another door in this metaphor of mine.

So, they are leaving multiple doors open across several ventures so they always have something to fall back to in case things go south.

This is arguably one of the worst things you can do, which is ironic, especially if you aim to be a serial entrepreneur one day. Great, not good, entrepreneurs can only tackle one venture or problem at a time to get a meaningful result.

The danger of lofty goals and pride

Building and running a business is a very demanding and high-pressure gig. It can have a brutal effect on your physical and mental wellbeing. Even when you’re experiencing success, it’s not entirely a 100% sure thing.

By running two or more businesses at the same time, you only multiply the hardship, stress, and pressure that comes with the territory. We can be filled to the brim with enthusiasm but also lack severely on the execution side of things. Once that ball starts rolling, it’s difficult to stop it.

The majority of entrepreneurs (at least, those I know) have this vision of success where their potent combination of abilities and ideas forms a path to that very success. It seems to me that they think they’ll have better chances of success if they diversify themselves across the board. Whether that’s a conscious effort or something innate we do as human beings, I don’t know.

What I do know is that great entrepreneurs typically imagine one way to succeed that contains within itself numerous contingency plans if something (un)predictable happens. That is the key difference here.

When the mind is not focused on one thing, it’s always hedging. And while hedging is important as a means to execute different ideas and methods, it can’t be your default mindset mode. In that case, you’re just doing enough to leave the doors open.

I have a theory that no one ends up married to a person who was one of the multiple choices and calls them ‘the one’. If you’re dating three people, either the other two left and you’re “stuck” with #3 or none of them are marriage material.

The reason why is because your focus can’t really do simultaneous due diligence on several people to get enough meaning. Ultimately, you’re not committed to one person or the idea of them being ‘the one’.

It’s the same with people opening the proverbial doors. Those are the ones who haven’t made a real decision and as such, aren’t fully committed. No matter how talented they are, they can’t do the best possible job as they’re not invested.

People generally don’t want to go into the depth of focus because it’s fun being involved 20%, 30%, 40% and fulfilling their sense of validation and empowerment that way.

The drawback of such an approach is that you miss out on all the real fun. If you become laser-focused and put in the remaining %, two things happen:

Most entrepreneurs don’t realize the long-term benefits of doing exactly that.

Being a great entrepreneur means prioritizing

Do note that there is no guarantee you are going to succeed in the end. However, you won’t feel shitty and regret it, knowing deep down you haven’t tried hard enough to succeed. It’s easy to be partially invested, always have a fallback and an excuse. It’s also not something great entrepreneurs do.

More often than not, lack of proper focus is what holds us back, which is why we must close doors. If we open multiple doors irresponsibly, they will be closed sooner rather than later.

So what do windows represent?

For me, it’s being honest while staying open to opportunities.

It’s when you turn down projects or ventures but keep them open by saying that you’ll be happy to commit to them (and give them your 100%) – as soon as your current mission is accomplished for your primary and only project.

I’d like to believe that integrity in this line of work can get you far. The way you maintain your values and ethics shows you can carry out to the fullest whatever responsibilities you have. Not only does it show you have a sense of responsibility, but that you also share mutual respect.

Thus, the person who is honest and actually thinking about the other key players – that’s leaving the window open, having options to explore other avenues and take the right actions when the time is right.

Windows are mutual agreements that you’ll be there when the time comes and that you can be counted on. That way, that door (opportunity) will be open when you want to go through it.

When you think about the metaphor, doors are the easiest way someone can steal stuff from your home. Multiple doors mean more legitimate ways to lose, as opposed to windows where you can leave them open to have fresh air come in and out.

In a nutshell, the metaphor is about focus and commitment on one thing that routinely opens the door for another because that’s the guarantee for maximum chances of success.

Just be careful – don’t let future opportunities end up taking your attention and becoming a fallback. That would defeat the entire purpose.

If this is too abstract for you, here is an alternative take. Windows can also represent diminished returns. The reality of running multiple businesses will inevitably slow you down, which will slow down your returns because you don’t give any single business the attention it needs to flourish.

With our strong bias for action, we entrepreneurs tend to dilute our efforts and resources.

When all is said and done, opening doors is actually shutting down possibilities of greatness. Multiple opportunities are just that – opportunities. Without proper focus and prioritization, you’ll be lucky if one stays “open” afterward.

In this highly competitive and ferocious environment, the odds for success are inherently against you. Why make them even worse with your own actions?

By the way, if there is one person in the whole world who can show me how opening multiple doors was successful – I want to interview them in my podcast. That’s a conversation I’d be all ears.