Why I am not investing in the cannabis industry 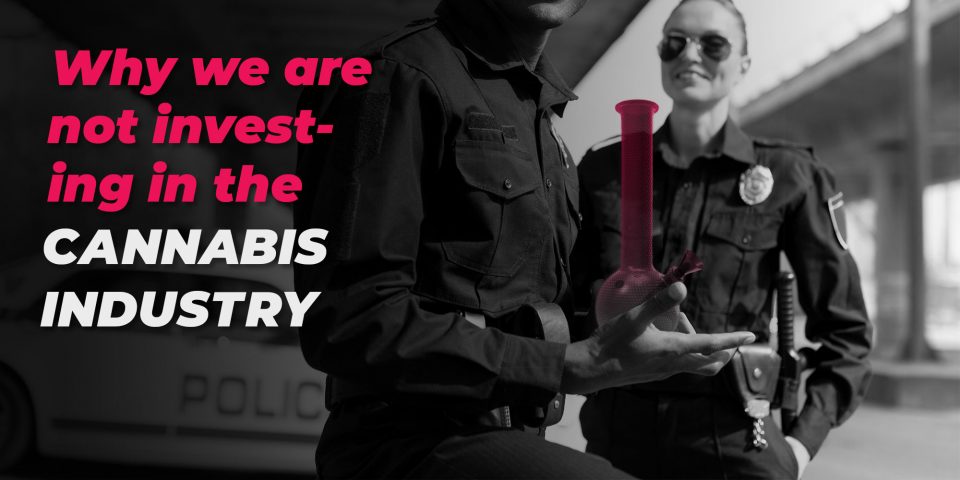 So, I’ve been increasingly getting probed about my unwillingness to put money into this cannabis thing. It is yielding some of the most trendy and profitable public companies in the last couple of years, with expected revenue of anywhere between $40 billion and $89 billion by the end of 2024, and a CAGR somewhere in the 19.4% – 37% range between 2018 and 2024.

It’s one of the most popular questions I get on a weekly basis: why are there no M51 investments in the cannabis industry?

I admit I didn’t understand what it was all about at first but after some research and numerous meetings with people who are in the know, I got the gist of it. I have no problem with the perception of the product or service offered, as taboo as it still is on a global level. My issue with the cannabis industry is the lack of long-term validity, plain and simple. Don’t worry – this is not going to be one of my rants.

There’s too much mud in the water to drink it

First off – kudos to all the people who managed to turn something that was illegal (and as such, had zero benefits) into a sound and logical business. With tighter and more widespread legal regulation, it can be a very profitable business.

From my point of view, the problem is that all these companies coming out of this space won’t amount to that promise or vision any time soon. People are taking over the trend of making money off the idea itself, sort of like what happened in blockchain and crypto, rather than the cannabis itself. Most of the companies that are going public or raising a lot of money aren’t making money off growing cannabis and selling it off. Instead, they are working around the idea of cannabis, trying to make real estate deals such as buying buildings or land and then leasing out the properties for growing cannabis.

In my opinion, such M.O. is not scalable, not to mention the fact there isn’t much legal regulation these days. That’s partially why this is a working thing now but rest assured, there’s going to be a lot of legal paperwork around all cannabis-related ventures.

I look no further than my own backyard. In Israel, the best way to describe the industry is semi-legal. There are some instances where the government allows you to grow cannabis or experiment with it but not sell it. If you’re not keen on doing business in Israel at all, you can register a business here and operate overseas, which as a concept already tells you something is wrong. If it’s illegal to sell in Israel but you’re still allowed to work around it, inevitably there’s going to be a little bit of chaos. That very chaos is where people are making money off right now – a simple arbitrage.

Developing around the idea rather than the idea itself

No one really has a full understanding of what the cannabis industry is going to be. It reminds me a lot about Bitcoin and the crypto industry, where there’s a similar, if not a more complicated mess. Another related example is uncovering amazing breakthroughs (or features, for the sake of the business argument) which could possibly come true, like curing cancer, Alzheimer’s, and all kinds of medical issues. It’s also a great concept in which I believe a lot.

But… there’s no business model around it. It’s trying to solve this oxymoron of sorts by making marijuana but not selling it physically. For instance, there are cannabis companies that invest in other cannabis companies. It’s like having a database with all kinds of information in it but not knowing what to do with it. That’s how I feel: I still don’t get the endgame.

A huge chunk of the industry is working around the point. There are these new solutions on how to utilize the cannabis itself, creating products that weren’t supposed to be cannabis-based just for the added value of it. Soup, soap, chocolate, gummies, and whatever. That’s ok but it’s also beside the point. Right now, it’s not much more than a hype thing because the logical explanation and expectations are that there should be a lot of business models. There aren’t: the industry is beating around the bush (how’s that for phrasing?) for the most part.

Historically speaking, there was a similar development with alcohol. I’m not sure the winners were people and companies that made it as an antiseptic, disinfectant, or solvent, but those that just made whiskey, beer, or whatever your poison is.

What is making money right now is just physically cultivating the cannabis and selling it because there’s a new market for it that’s totally legal, and has added value. I’ve had more than a dozen meetings and not once someone offered me such a business model. That’s what I would do and I’m willing to entertain such offers.

Look at it as a short-term investment

So what do we have in the end? In Israel, you’re not allowed to have mass-selling opportunities, and the world is also not much different in terms of regulation. Whatever you’re making today may not be suitable tomorrow. So my advice to any investor or even a person looking to work in the cannabis industry – look at it as a short-term thing.

Looking at it short-term, I can see the value but it has to be precisely defined so I know exactly what I’m getting ROI-wise in a year’s time, not in five or ten years. You can make an arbitrage of the market value but to invest in the long run? No. I would wait for the regulation to actually kick in and then make your business plan where you don’t have to pivot and hassle the investors.

Don’t fall in love with the trend itself. When Bitcoin and the entire cryptocurrency hype came up (as that’s the closest example to the cannabis industry I can find), everybody was in this mass hysteria. People were slapping each other with the prices of bitcoin, peaking at the $20k. The people who bought those bitcoins and sold them at the right time comprise a very small percentage. I’m not saying this cannabis thing isn’t a way to get rich in a short time, just that it’s very flukish. I have a feeling the cannabis industry has the same spin where whatever you do is amazing.

Don’t think the opportunity is there just because there’s this warm feeling flowing around. Don’t quit your day job and put 100% of your investment. It’s a wrong feeling, and that’s why I’m not investing for the moment. For a trend where the basis of economic growth should be growing and selling cannabis, everything is too sexy for my taste.