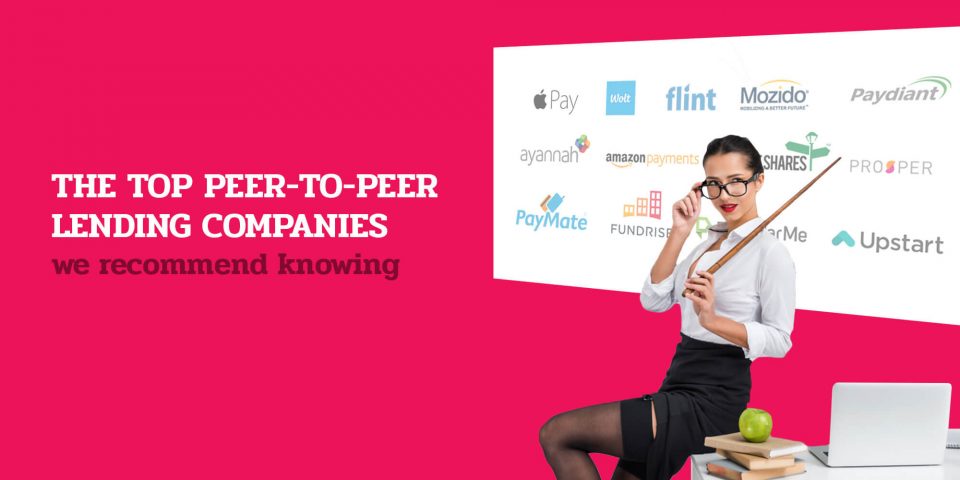 As types of financing go, peer-to-peer lending (aka P2P, person-to-person, or social lending) is fairly underrepresented in the grand funding scheme. It’s relatively new but definitely worth a closer look, especially since the global P2P lending market reached $54 billion in 2018 – significantly up from an estimated $9 billion in 2014.

Reasons for such rapid expansion lie in the many advantages P2P lenders offer, particularly compared to banks: more favorable/lower interest rates, fewer and typically lower fees, looser credit score requirements, and a wide array of loan amounts, to name a few. In this post, I’ll try to give you a rundown on some of the top peer-to-peer lending companies as they make this alternative method of financing very appealing to entrepreneurs.

How does peer-to-peer lending work?

The process is simple: you (the borrower) are connected directly to an individual investor (lender) via a P2P lending platform. It acts as a middle man between the two sides, setting the rates and terms that dictate the transaction. Every company goes by its own rules but generally speaking, most of them stick to this process:

Depending on the platform, the entire process can take anywhere between a few hours and days to a few weeks. P2P platforms (also called marketplace lenders because they act as marketplaces of sorts) earn money by imposing different fees on borrowers and taking a cut/percentage of the interest accrued on the loan – same as the lender who gets a higher return this way than through a savings account, for instance. Finally, the borrower gets a better interest rate compared to what he/she would get with a classic bank loan or credit card.

It’s safe to say that all sides get a good deal.

The peer-to-peer lending industry is constantly growing in popularity, offering a number of choices for prospective borrowers. Below are some of the best P2P lending marketplaces (in no specific order):

On virtually every list of P2P platforms, LendingClub is an unavoidable entry. Considered as one of the originators in the P2P lending space, the company is one of the longest-standing players and the first P2P company to successfully go the IPO route. It has facilitated over $16 billion in loans.

A lot of the things said about LendingClub are true for Prosper as well, with the company holding the distinction of being the first-ever P2P lending marketplace. Concluding with Q3 2019, more than $16 billion in personal loans have been originated through the platform, with close to million people borrowing.

You can pay off your loan with fixed three- or five-year terms, for a minimum of $2,000 to a maximum of $40,000 for a wide range of loans, including small business loans.

For Upstart, “you are more than your credit score”. Founded in 2012, the company prides itself on taking into consideration things like education and experience when determining rates, and not just the FICO score.

What’s really interesting about Upstart is the fact it uses artificial intelligence to approve loans, with almost half (47%) of its loans being handed out without humans interfering with the process.

Similar to Upstart, Peerform also doesn’t believe that your credit score is enough to properly assess possible risks. Instead, it complements it with its own Peerform Loan Analyzer, allowing people with credit scores as low as 600 to secure funds.

It’s a relatively older company (I can’t believe I’m actually saying this), founded in 2010 by former Wall Street execs, that offers debt consolidation, loans for weddings, home renovations, healthcare expenses, and car financing. Loans range from $4,000 all the way to $25,000, with APR moving between 5.99% and 29.99%.

Funding Circle is a solid choice for already established small businesses that have hit a glass ceiling and have a hard time advancing to the next stage. The company operates in the US and UK only, and offers loans going up to $500,000 with rates from 1.9% per year.

So far, more than 77,000 businesses worldwide have used Funding Circle’s services, taking the total amount of loans just shy of $11 billion. The number of investors is also commendable, with more than 83,000 retailers, banks, financial institutions, and even the UK government itself wanting in on the action.

P2P lending is an innovative approach to the age-old banking equation, eliminating the traditional institutions and relying on a tech-driven financial system instead. Ease of access to specialized loans at favorable rates and fast resolution are big reasons why this is a multi-billion dollar industry today.

But before you get all giddy and go straight to one of these websites, be sure to research the lending company and the loan products you are considering.

I’m saying this because every type of funding has its pros and cons, and this one is no different. Various fees and high(er) interest rates are two things that can complicate P2P lending and make it almost as expensive as banks for some. On top of that, most require you to provide sensitive financial and personal information, and you don’t want that falling into the wrong hands. Go through a bunch of online reviews from reputable sources before you make a decision – you’ll sleep easier at night.