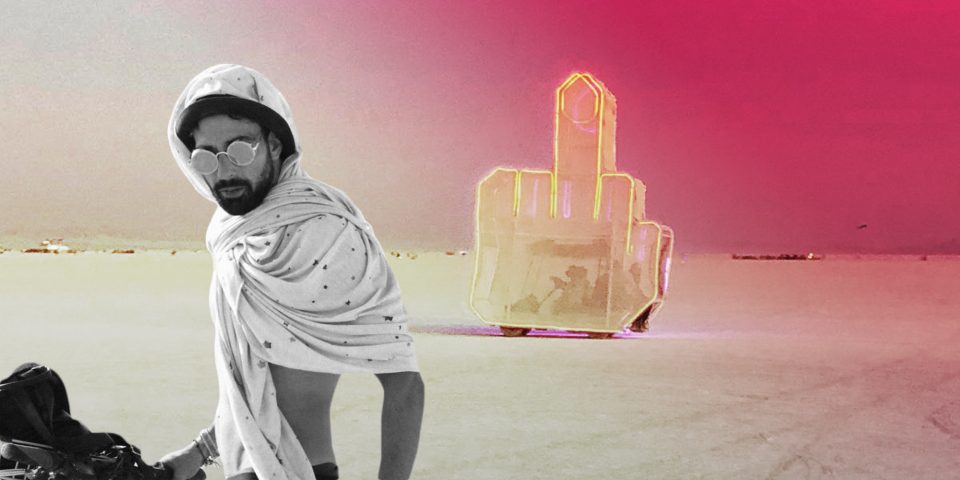 As one of the most unique happenings in the entire world celebrating creative culture, Burning Man was long an entry on my bucket list. There was always something more important to do or a place to be but this year, I was able to cross off the festival on my to-do list.

The majority of people think it’s one giant party that lasts for eight days. To those that haven’t had the fortune (or privilege) to attend, it’s somewhat difficult to portray a picture of what Burning Man is. I’ve been to Midburn, the Israeli version so I had a fairly good grasp of what to expect but I was still being told I have to be there to truly understand it.

And it’s true. BM is on a whole different level. You really have to witness it first hand and experience the sense of freedom and self-expression the place/desert oozes with. I’m pretty sure I won’t capture its essence with mere words but I gotta’ try.

In the desert, you can remember your name

This a place with absolutely no kind of infrastructure. No electricity, no water, no reception, nothing. Think about it: you’re paying good money to be without basic necessities to sustain normal life. To top it all off, there’s no money exchanging hands here. Burning Man is a “commerce-free event” where only coffee and ice is sold. You need to bring the rest of the supplies with you if you want to survive eight days in a desert.

However, there are 10 principles that the late founder Larry Harvey laid out. These are not rules per se but more like guidelines highlighting what Burning Man is about. All of this got me thinking with regard to how the festival promotes three basic company culture elements by creating a kind, generous and fun state of mind.

The first one relates to whenever people wear costumes, they are happier. They get to express themselves freely and be free. The second thing is no Internet, whereas you learn through experience by interacting and talking to someone and not looking up someone or something. You feel freer, you get to experience the moment instead of studying it. And with taking away money from the equation as the third thing, you become more open and giving. Soon you find out that everybody around you is willing to help you. It’s a cycle where one person affects another which affects another and so on until the circle closes.

Leading in an organized chaos

There is a keen sense of extreme creativity during these eight days in the middle of a Nevada desert, where everything you experience is normal. Where else can you see a circus camp next to a techno/rave camp next to a yoga camp next to a civil lecture camp? It’s organized chaos in all its glory where you walk around in city-like blocks and stumble upon vastly different experiences that somehow make sense at the same time. In your head, you’re experiencing madness and disorder but when you zoom out a bit, it’s neatly arranged and organized.

It reminds me of M51 a lot. Oftentimes, upon visiting the company, a lot of people tell me it’s somewhat chaotic. There are so many companies in our family so from time to time, I hear questions about what certain people and companies do, and generally, how does it all work together. In both cases, you can actually find what you’re looking for but you have to go through all of the “chaos” to find it.

The parallel between Burning Man, M51 and company culture and/or leadership is the existence of structure and the way you as a leader encourage positivity, foster social relationships, and empower people to be expressive in their own way. People feel their best, whether it’s physically, mentally, or emotionally, when they have nothing to hide and wear their business version of a Burning Man costume/outfit. When they feel at their best, they work at their best and are productive across the board.

Everyone expresses themselves differently, which is why there are some very basic rules in our setup. The rest is complete freedom to make mistakes, to experience the business itself, and to go forward without holding people back. Our flat organizational hierarchy and the subsequent nature of our relationships drive a lot of things on a company level, from going vegan once a week to accommodating pets and tons of different things.

Recognition of your inner self and the reality around you

On a personal level, the most inspiring thing coming back from the 33 years old happening was actually realizing there are still things and people in this world that can surprise you, stuff you’ve never experienced before. Even if you think you saw everything and did everything, there are nonetheless things in the world 100% different from anything you know.

There’s still hope everything can radically change in one minute if need be and to me, that’s incredible, perhaps even more so than Mr. Incredible. Whatever city or place or festival you go to, there’s always a feeling of similarity. It could be impressive, it could be unbelievable and you could still feel like it’s more of the same/similar in some weird sense.

But Burning Man? Imagine going to a slightly habitable Mars and spending a week there. Now imagine a community that reflects the spirit of a unique individual and organic growth. That’s a community/company where every member feels empowered to invest their talents and contribute to a greater goal. In other words – a reality you make happen, just like Burning Man.