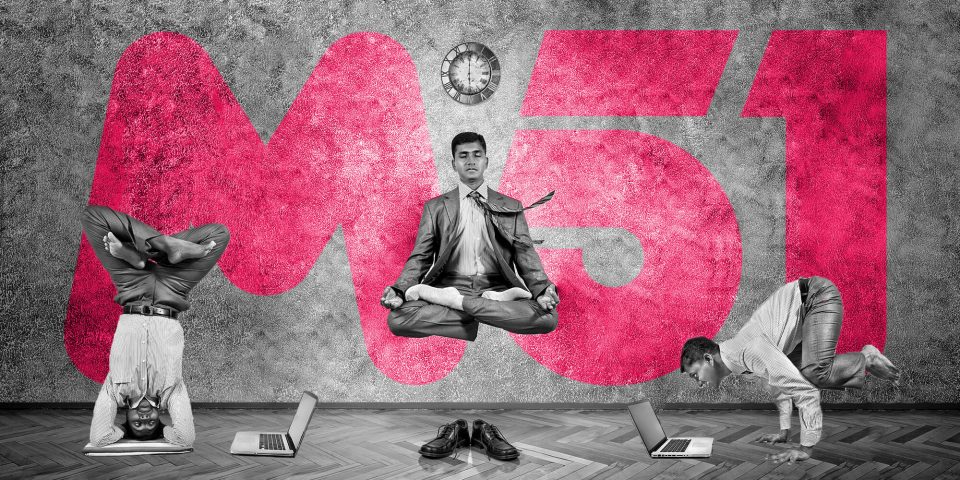 As more businesses uncover the benefits of yoga, it’s increasingly finding its presence in the office setting. Mixing yoga with work has a lot of benefits that are backed up by science, so about three months ago, we implemented it in our environment and it’s been awesome ever since. Seriously – if you’re not doing yoga, you’re missing out.

In the honor of the International Yoga Day celebrated around the world today, we dedicate this post to this wonderful 3,000-year-old practice of spiritual and physical catharsis.

There’s a ton of reasons why, starting with the obvious: reduced employee stress. Before you say anything, let’s talk about the scientifically tested and proven side of yoga. We are well aware there’s no shortage of myths and widespread beliefs about yoga’s benefits, with a number of proven facts thrown in for good measure. It’s fair to say all of this creates a mixed picture of how effective yoga is.

However, research has proven the role of yoga in lowering employee stress. In its recent study, Oxford University’s Occupational Medicine (a peer-reviewed medical journal) found that yoga has a positive effect on worker’s health, especially in reducing stress. Considering that stress can potentially cost millions of greens due to diminished productivity (and can lead to and worsen physical ailments and conditions), we’d argue yoga pays off solely on that merit.

The same publication proved a few years back that, along with lower stress levels at work, yoga helps to significantly reduce back pain and improving psychological well-being. As one of the leading causes of disability around the globe, back pain is particularly important in this conversation as it’s probably the most common workplace complaint, especially with desk jobs.

Another major entry in the pro column is burnout prevention. A study published in Workplace Health and Safety showed nurses who participated in an 8-week yoga intervention had considerably higher self-care and mindfulness, as well as less emotional exhaustion and depersonalization – two key components of burnout.

There’s also talk of yoga being associated with lower blood pressure, bringing down the number of sick days employees take, better sleep, and improving mobility and flexibility. Although in most of these cases more research is needed to confirm the findings on a larger scale, the value of yoga and other mind-body practices for occupational health and wellness is fairly evident.

When you consider all of those aspects, the real question is: why wouldn’t you implement yoga in the workplace? It’s easy to incorporate, requires low investment, and basically the only equipment you need is a floor mat.

Perhaps, more than anything, yoga is fun. As many will testify, including our own Tamir Ciprut (the guy we call SDK Conductor for all his mobile game magic) who became an avid practitioner.

“It makes you very relaxed and aware,“ Tamir says about the experience. “The lessons are very fun and that relaxed state lasts throughout the entire day. Your body feels very good.”

Once a week, we engage in an hour/hour and a half long session. Sometimes, we practice yoga on the roof of the building our offices are inhabiting. There’s something special about seeing the sun and the sky amid all the ruckus of modern life and being untroubled by it. Our HQ is located on Rothschild Boulevard, one of the busier streets in Tel Aviv so doing yoga on a rooftop is a fairly unique and fulfilling experience. Hopefully, this picture will do more justice than our words:

Another testament to the positive effect of yoga in our workplace is how quickly and strongly it was embraced. Such was the case for Michal Hanan, our Revenue Therapist (a fitting title), who shares her initial reaction.

“I was curious and wanted to see what it is that has everyone talking about it,” says Michal rather fondly. “I fell in love with it. I’ve never done yoga before, which makes it all the more amazing for me.”

“I prefer to do it in the morning because you start the day relaxed and be more productive when it comes to work,” she adds, while pointing out there’s a bonding element to yoga as it brings people closer.

That’s because there’s no need to take yoga seriously (or mandatorily, for that matter) and everyone feels comfortable. We have an open relationship with our yoga instructor, where we can ask questions and share a few laughs together. The ability to provide individual attention in smaller groups where everyone knows each other is arguably one of the advantages of work-based yoga compared to regular classes.

There’s another side to yoga that goes beyond the confines of the office. It isn’t just about workplace wellness – there’s a bigger picture here. It promotes mental health and a healthy lifestyle that reflects through exercise habits and good eating.

That’s one great thing about yoga that perhaps isn’t highlighted as much as it should be in this case: it grows beyond a workplace ordeal. While most of us receive our dose once a week in M51’s offices, those who don’t do yoga on the job can still practice it outside the confines of work. And we do, every day.

“The majority of my colleagues practice it, often outside the weekly lesson,” Tamir points out. “We learn different yoga postures, as well as pranayama breathing techniques that can easily be practiced while you work, especially sitting behind a desk in an office.”

Some three months in, yoga has become a part of our workplace culture, allowing everyone to participate and be more satisfied with their job, as well as be more productive. While there are many positive things attributed to this phenomenon of sorts, one thing we can fully attest to is its role in creating a lower stress environment that promotes relaxation.

Our hope is that this post helps you gauge the interest and effectiveness of yoga. We wouldn’t practice it ourselves if we didn’t believe in its powers. Happy International Yoga Day and namaste!