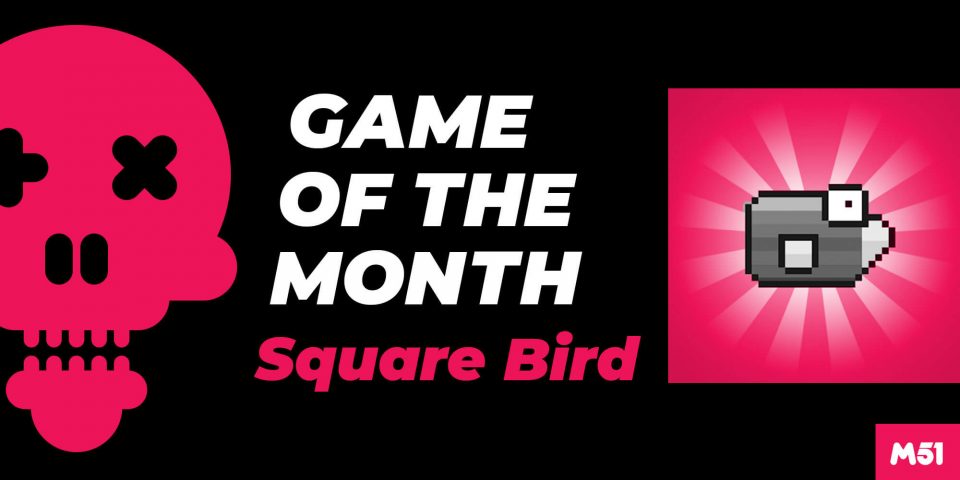 It’s December, which means we’re about to wave 2019 goodbye and welcome 2020 wishing it brings happiness, health, and love. And gaming – lots and lots of it.

But until the new year kicks in, there’s still the matter of tidying up these last couple of weeks. We conclude 2019 with Square Bird, a 2D hyper-casual puzzle/action title which I’m positive you’ll like.

First, a little about the people who published the app: Moonee. One of the reasons why I picked this game is due to its interesting backstory. Originally, Square Bird was released by Triangle Games. Apparently, a few publishers gave it a go but met very little to no success, until Moonee stepped in and gave it the edge it so badly needed.

I haven’t tried that version of the game but the way the game is now, you just know guys and gals there did a great job and realized the full potential of the game. On that note, I highly recommend you check out their other hit game – Crazy Climber.

It’s an Israeli company too so I have to show them some love on that part but most of all – I appreciate the good work, especially when you’re on the inside and know all the challenges and issues mobile game publishers routinely face. The fact that the company was picked by Google for the first official “Gaming Growth Lab” (along with our pals at OVIVO) should say plenty about the quality of their work.

Even though the character you are playing is a bird, this is essentially a running game. The goal is to help the cute Square Bird (I’m assuming that’s its name) reach home by navigating above or below obstacles, as well as across gaps and emerging hostile animals. You do that by laying as many eggs as you want, essentially creating an egg tower.

Here’s the trick: once the egg is hatched, you can’t get rid of it unless you create an optimal tower, which would be the same height as the obstacle you’re trying to pass. Hence, your only option is to go higher, which will exactly be the case most of the time.

As with every game I covered so far, there’s a great mechanic at the center. I’m a sucker for innovative and creative approaches, and such is Square Bird’s take on the old and ever so lovely Super Mario theme. Even the ‘fever mode’, where you touch the grass three times with perfect landing (without any eggs) and gain the shooting ability, is reminiscent of Mario’s transformation when he picks up the Fire Flower. In this case, you destroy platforms and creatures popping out from below, and shoot your way through them but only for a couple of seconds.

That being said, Square Bird is not just a straight copy like most of the games these days. I’d argue it’s one of the main reasons why the game is so popular (more than 10 million downloads on Play Store alone) and continues to delight users.

Because it’s a bird-themed side-scroller essentially, I can see how it might be compared to Flappy Bird but this is a superior game and more reasonably challenging (Flappy Bird was just maddening at times) as it progresses. One other thing I really like is the option to buy beautiful customized birds with game coins, and give it the badass look you want. The same goes for the background – you can change the color scheme to over a dozen presets.

Perfect symmetry of fun and difficulty

In terms of gameplay, it’s just fun – that’s the best way I can describe it. There’s a satisfying speed of movement with which you advance to new levels, all the while keeping the right timing and the right height. The levels offer nice variety so every once in a while, there’s something new added to levels as you progress to keep you on your toes. For instance, gaps become wider and wider with the destroyable walls so you’ll have to watch not to shoot the very ground you’re supposed to land on.

The more you progress, the more you will experiment – at least that was my experience. I find that tapping with both thumbs (like when typing) or more than one finger helps as the game speeds up and walls get higher. All in all, everything feels smooth enough, and you get the feeling the game managed to find an equilibrium of light-hearted fun vs sensibly challenging difficulty level right from the start. Once again, this is arguably what makes it so good and enticing.

Visually, the graphics are smooth and clean, making the game eye-pleasing. The only bad thing I can say about it is the lack of music, even though there’s an icon on the home screen where you can opt to turn it off. I’ve checked online and I’m far from the only one experiencing this issue on different platforms but it doesn’t really affect the overall impression, if at all.

Square Bird is one of those games you can play for hours because it offers a very simple, yet rewarding experience. As far as examples of casual and enjoyable mobile gaming go, this is one that should be used often. The more I play it, I find it a good time waster but not highly addicting, which is the ultimate combination in my opinion.

And like that, I’ve slowly run out of things to say about Square Bird. All that’s left for me is to tell you to go download it ASAP (Square Bird, iOS) and see for yourself how great it is. And, if you haven’t been following my ‘Game app of the month’ series, here’s how you can catch up on more great mobile games:

That’s it from me for this year. Happy 2020, people – may it be filled with lots of good games!