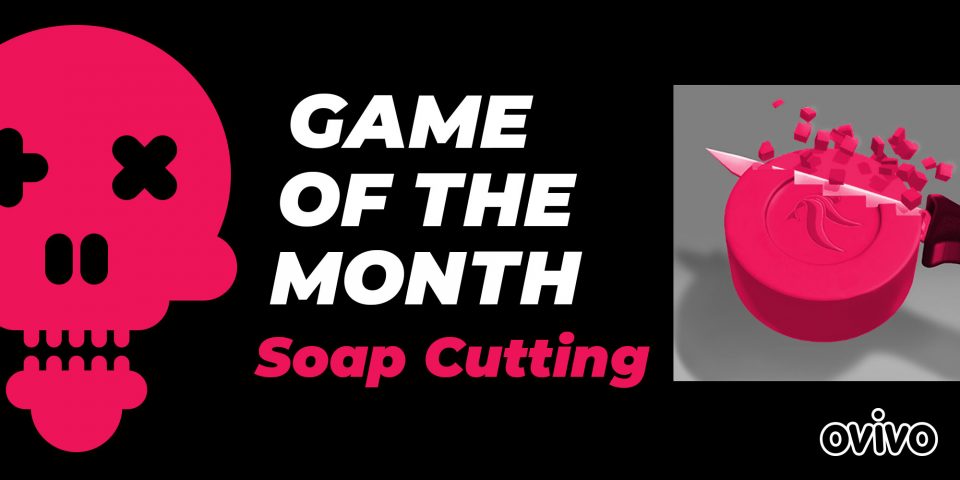 Hello everyone –  from now, I’ll be taking over the ‘Game app of the month’ series where every month, we shine a light on a mobile game worthy of your unbridled attention. I’m a game designer and Head of Product at OVIVO Games so hopefully, my credentials are in order. If you’ve been following our past work, you know we like to keep it fresh and interesting, and the first entry in 2020 is no different.

Why, I hear you ask?

There are a number of reasons, starting with the fact that Soap Cutting is equally an ASMR (autonomous sensory meridian response) app as much as it is a mobile game, surpassing the traditional definition of a game but keeping the experience of one intact. Let’s dive into it.

The theme of Soap Cutting is – you guessed it – soap cutting and the boys and girls at Crazy Labs made a smart (one could even say bold) move to promote a game that looks like a game but is more of an app with game-like features. They based the theme of this “game” on the somewhat strange, yet highly popular sensation/trend that largely originated from people whispering while they do things.

Specifically, the used the soap cutting trend that seems to be particularly mesmerizing as a foundation: soaps of various shapes, sizes, consistencies, and colors are slowly peeled away vertically and horizontally piece by piece. If you haven’t already stumbled upon such a video, here’s how one looks like:

I can personally vouch that those videos are very calming and satisfying to watch for a reason I can’t quite figure out. All I know is that I have watched them long before somebody came up with the idea of gamefying it, and that’s the point: the distinctive theme creates a strong association in the mind of the player, especially an ASMR fan. Arguably, that’s what made the game so popular in the first place: anyone who ever watched a soap cutting video would tap to install after watching the game’s ad.

This brings me to another point:

This is a satisfaction-oriented product

In mobile gaming, it’s one thing to recognize a trend that can be leveraged but it’s a whole other thing to leverage it effectively. It’s apparent to me that the team behind Soap Cutting has invested a lot of time and effort to make the cutting process as close to the real thing as possible.

It works like this: the top part is sliced up into tiny cubes which, when you slowly drag the knife beneath, fall down in waves on the surface below. The realistic cutting includes the faint vibrations and sounds matched to movements and tuned to perfection so that the response feels true to real-life soap. This makes the game’s mechanism extremely satisfying both in the visual and audible sense, as well as appealing to a broad(er) audience.

Speaking of mechanics, the game is designed for one finger use, which makes it super simple to play. Swipe down to cut the soap and swipe up to remove the leftovers before you take a swipe toward the next layer of soap by untapping (the knife resets at the starting position). Of course, it helps that it is obvious what you need to do from the very second you install the game and tap ‘Start’.

There’s a certain way Soap Cutting uses human psychology to improve the gaming experience, and I find it rather clever and inspiring. You see, after you peel the first few layers, you uncover that every soap contains a small figurine in the middle. I don’t know about you but I want to find out what it is I’ll be carving out so that element of intrigue pushes you to cut and cut and cut until you get to the end (or in this case, bottom). Whether it’s just me being curious or us humans are like that by default, there’s something to it that keeps you going and working according to the game’s master plan.

Despite soap cutting being straightforward as it sounds, there are just enough game elements to make this hybrid of a game/app (gapp?) enticing, whether you are into ASMR or not. Each level unlocks 20% of the mystery box at first (later it’s 10%) where you can earn coins to spend them on different knives. The game also features tons of different types of soaps so you won’t get bored, at least not right away.

Considering all of what I wrote, it’s not much to go on, right? As someone who is in the business of making hyper-casual mobile games, I am amazed by the effort/results ratio in this game’s design. With a very fast production time (November 2019 was the date of the first soft launch), Crazy Labs managed to top off the heavyweights of the mobile gaming industry and race to the very top of US charts for the holiday season with Soap Cutting. Right now, the game is ranked in the top 10 at App Store. Kudos to the team – well deserved.

If you want to check for yourself what the fuss is all about, you can download the game from Google Play or App Store. I was a skeptic at first but it immediately got my attention, not to mention it got me relaxed and calm when I was stressed for whatever reason. I’m pretty sure you’ll have a similar experience.

That’s it from me for now. I hope we got off on a good start – there are plenty more cool and interesting games in store for this year. ‘Till next time – game on!