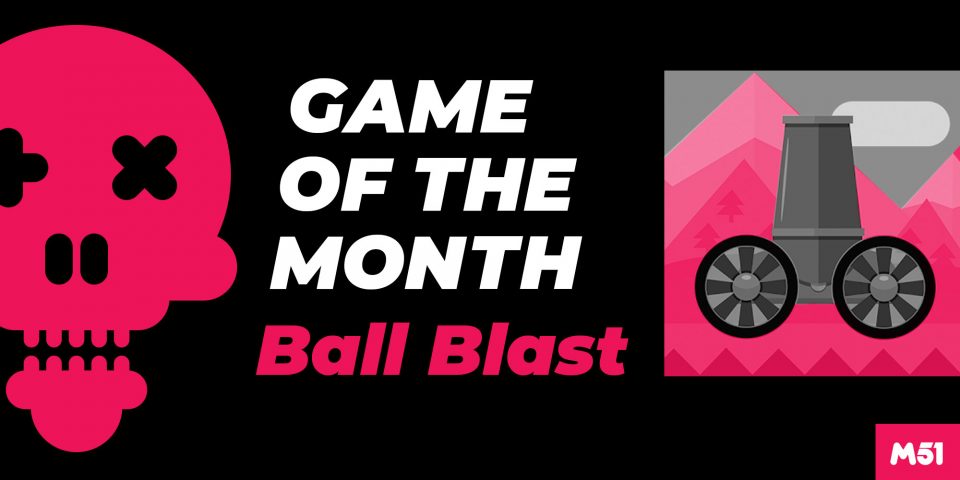 Writing these posts is really fun for me, almost kind of therapeutic because I enjoy the games I share with you. Some people are starting to notice my work because I was asked (a few times, actually) how come I don’t have “games where you do things with balls”. It was a fair point seeing as ball jumping games are some of the most addictive ones out there.

Hence, the game app of November is Ball Blast. Hey, you gotta’ give people what they want, right?

There are more than enough reasons why Ball Blast is worth your time. First, the game is developed and published by Voodoo, one of the biggest publishers in the world (if not the biggest) with 100+ launches, over 2 billion downloads and 300 million monthly active users. The studio has a proven track of great games that feature minor improvements and innovations on established games, so a certain level of quality is guaranteed. Naturally, Ball Blast is no exception, being instantly recognizable but different enough to be fresh and interesting.

Second, and more importantly – it’s all about the gameplay. That is the real star of the show right from the get-go. You see, in the mobile gaming world, every game that finds its way to the storage space of a smartphone has a few seconds upon opening to prove it’s worthy of that space. Devs of Ball Blast understood this perfectly and as soon as you tap the game’s icon, you are in the battle mode. Almost the very moment you fire up the game is the moment you fire up your cannon, with the message “swipe to shoot” acting as the only advice you’ll receive.

Such a simple transition is effective to get a player hooked immediately, where you have to hit multiple balls that fall from the sky and bounce around by moving your cannon horizontally. As you shoot the balls, they explode and drop coins, with bigger balls turning into smaller ones. You need to roll left and right to pick the coins, all the while shooting some balls and avoiding others. Advance through levels and the balls get bigger and bigger, which makes getting those coins all the more important so you can buy upgrades.

Do note that the balls also reward you with gems but these have no effect on the gameplay whatsoever as they only allow you to buy cosmetic enhancements (backgrounds, cannon skins, etc).

The thing I find genius when it comes to gameplay is the balls themselves. They have no special designs (there’s an idea for a sequel): no armor, shields, and such. The same goes for your cannon: it doesn’t do anything differently as you advance, all you need to do is just aim your cannon and fire away. To me, it shows how good gameplay is the most important parameter you can have in a mobile game.

There is a certain zen to how the game is made. The in-game economy is extremely well fine-tuned so that your upgrades – ‘Fire speed’, ‘Fire power’, ‘Coins drop’, and ‘Offline earnings’ – make the game not too easy on one hand, and not too hard on the other. Here also lies the “mystery” to what makes it fun shooting balls repeatedly. ‘Fire speed’ upgrades the shooting speed, ‘Fire power’ increases the damage you deal with your cannon, the ‘Coins drop’ allows you to earn more money from your shootouts, while the ‘Offline earnings’ upgrade increases the rate of coins earned while you’re not playing the game.

Once you become accustomed to the idea of shooting and moving, you can strategize on how you want to play the game. If you’re playing the game casually, investing in money-centric upgrades may be the right choice. However, if you’re seriously amped about getting through the levels as fast as you can, the fire speed and power upgrades are mandatory. Alternatively, you can combine upgrades for an approach that best suits your playing style.

In any case, various approaches only add to the addictiveness of the game as these improvements make you feel like you are playing a long-play, “hardcore” game and not a hyper-casual one. There’s a sense of hunger for power, driving you to play more and progress further by looping you into collecting coins and using them. If it sounds monotonous, it’s not – dedicate a few minutes of your time and you’ll see what I mean. There’s a meaningful way to progression, motivating you to keep going by carefully pacing the difficulty of new levels.

In fact, every major aspect of the gameplay seems to be optimized to perfection, from the difficulty to economy to movement. It’s my theory that Ball Blast performs so well because it’s a result of a whole lot of testing until the people in Voodoo managed to get such an accurate and enjoyable experience. While I can’t base my theory on account of some hard evidence, the fact remains that a year and a couple of months since its release, Ball Blast continues to fascinate gamers.

As I mentioned before, you can see if from the very beginning. The game puts you right into the action as soon as you open it because the people behind it understand it’s all about instant fun. What’s also interesting is the fact that Ball Blast achieves this with a design that you wouldn’t normally call great or particularly eye-pleasing, as well as with limited customization.

Yet, I can honestly say that this game has kept me entertained on countless occasions, and is among the most addicting game I have ever played.
If you want to test my claim for yourself, you can download Ball Blast for your Android or iOS device.

Also, if you have a particular type of game you’d like me to cover or just want to recommend a game, feel free to reach out – I’m usually active on LinkedIn.