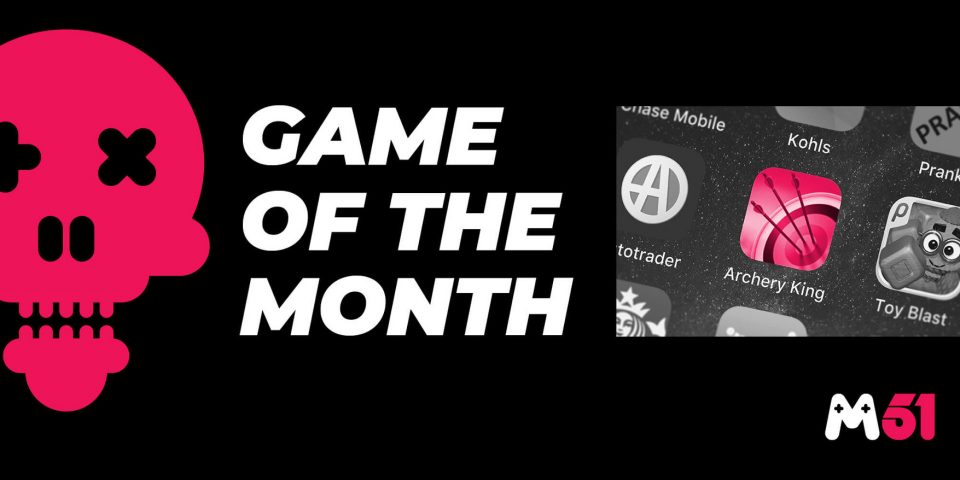 If there is one thing that we at M51 almost unanimously love to do, it’s arguably gaming. For example, there’s routinely someone giving the business end of a joystick to a fellow colleague on PlayStation (usually its on FIFA and it’s usually me – ha!) during breaks. The majority of us are passionate gamers and it’s no secret, really. We even have a gaming brand that allows us to go deeper and do a little bit of our own internal development.

The nature of that job mixes business and pleasure in the best possible way. Every now and then I come across a mobile game that totally gets me hooked and awakes the dormant need in me to share it with the rest of the world. Hence, every month you’ll be reading about a game that caught my attention and likely caused me to spend countless hours on it. Those are the best ones!

I’m starting the series with one of the games developed by a well-known name in mobile gaming: Miniclip, the creator of mobile classics such as 8 Ball Pool, Golf Battle, Soccer Stars, Flip Diving, as well as the one I’m about to bore you with for the next three or four minutes: Archery King.

More than a simple game

So what’s the deal here? Archery King is a simple archery simulation game. You can play 1-on-1 matches, online tournaments against other players all over the world, or pretend to be Robin Hood on your own in single game modes. You can play by either using a guest profile or connecting with your Facebook account. The game also features in-app purchases, such as upgrades and repairs of your archery equipment, extending gameplay, etc.

On the surface, Archery King might sound a bit plain and boring. After all, there are plenty of similar games. However, once you get into it and pass that initial phase, you realize it’s so much more than the simple “ready, aim, fire”. There’s no denying that it has very basic game mechanics but ‘simple’ doesn’t have to equal ‘poor’. Simplicity is sometimes the best driver for addiction, and this game is a great example of how a basic concept infused with realism can become absolutely addictive.

It also has a betting side to it. Namely, before you can enter a tournament, you need to put a specific amount of virtual money into the tournament pot. If you lose, that money’s gone, but if you win, your virtual wallet will become a little fatter.

As for the visual experience, Archery King features appealing graphics that work well overall. I own a Galaxy S9 and I experienced no issues whatsoever (I can’t say the same for the iOS version because I haven’t tested it). As a rule of thumb, I think most Miniclip games have a fairly similar look (and concept) but hey – it works.

Mastering the art of archery

The way the game behaves is a major factor of its success. The controls are very easy to master as you would expect from such a premise. Pulling the bowstring back is done by holding the bottom of the screen, while you move the bow by sliding your finger across the screen. The challenge is to let your finger go at the right moment to make it fly at what you’re aiming.

This is where things get more interesting as just like in real-life archery, the success of your shot depends on outside factors such as wind. The more you play, the trickier it becomes to control your shots thanks to the wind speed and direction, as well as the target vicinity. The game’s physics engine simulates the archery shot like in the real world – if you ever shot a real arrow, you’ll know what I mean.

After each shot, the targets move slightly further away from you. You can try to keep up with these difficult conditions by acquiring better gear like improved zoom sights and special bows and arrows through in-game purchases. These allow you to create hundreds of different combinations and fully customize your experience.

New levels also bring new locations. There is a nice variety in game modes, including Standard, Rush, Bingo, and a story type mode that is also available offline, each with their own perks and difficulties. For instance, if you need something a bit more exciting and challenging, then the Rush mode is perfect for you. In this mode, you have to take shots at moving targets, forcing you to adjust your aim frequently.

Both Rush and Standard modes have special events during which you can gain access to a wide range of target types. Obviously, the targets aren’t limited to plain old bullseyes in the first place, allowing you to shoot at wooden animals and bottles as well. For those who prefer the single-player gameplay, it can be unlocked as well, although it can take some time and effort.

Why? Because this is not a novel concept (it’s been done over and over) and by default, it’s not very exciting. Yet, the devs at Miniclip have taken something relatively boring that should be, by all accounts, very hard to make fun and engaging, and made it just that. You shoot an arrow into a target – that’s hardly a promising pitch to a mobile game.

Yet, through great graphics and mechanics, as well as the well-thought out competitive side through game enhancements and progress, Archery King ultimately became an exciting game that draws millions of users. If anything, the people responsible for it kind of proved that every game that is boring (on paper or otherwise) can attract and hold interest with the right ingredients. Honing in on the skill does take some time, but I’d argue that’s the hidden beauty of this game: you’re in it for the long run. Once you get the hang of it, you’ll become addicted. Trust me, I have.