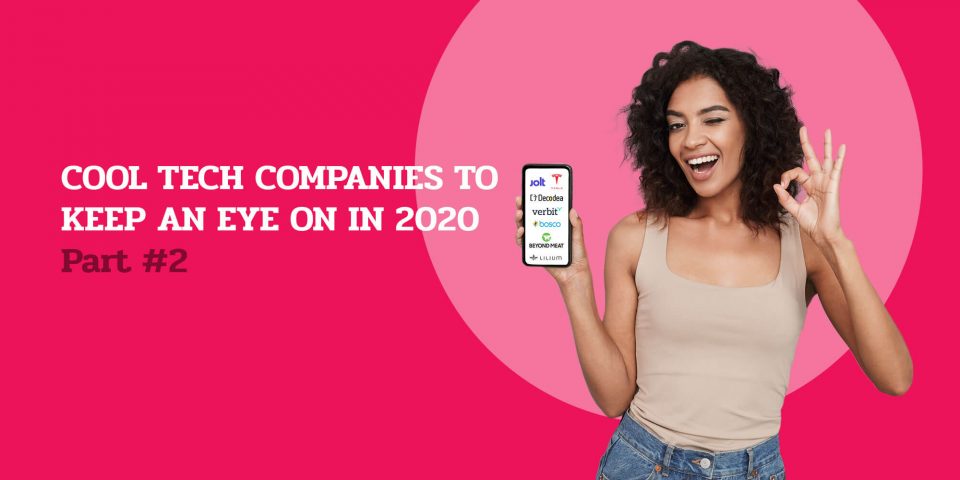 Last week, we published our select opinions on exciting developments in the tech industry. Today, we reveal the second batch of interesting and innovative tech companies that people at M51 believe will be very successful in the next 10 months or so, and well beyond the start of this decade.

First up – Jolt. The easiest way I can describe the company is the next revolution of business education. Instead of going back to university and getting a master’s degree, the company offers a network of learning spaces where users can learn relevant business-oriented stuff in brief and focused sessions.

I say relevant because traditional educational institutions are slow in catching up with current technological and business developments. With Jolt, I feel like you’re getting into a highly flexible business school where you can learn new skills and move up in your company or try your luck in a new industry.

More importantly – you are taught by various professionals, people who are actively participating in the transformational process of modern business (especially in the digital landscape) and are well-versed with current management and leadership skills, marketing, sales, and so on. Not to mention that this type of skill-centric education is more cost-effective and efficient than its traditional learning counterparts.

The bottom line: education is fun and cool once again (my ‘don’t do drugs’ type of message to all the kids out there).

Another company I find really interesting is Verbit. It applies innovative technology such as AI and machine learning to a very traditional area of transcription and captioning. The company is far from the only one dabbling in this particular segment but it is one of the rare ones who dare to venture into industries like education and legal (a couple of their main markets), where the margin for error is close to zero.

Verbit’s automated speech recognition (ASR) engine uses both artificial and human intelligence to provide a smart transcription and captioning solution. Human transcribers are constantly working on correcting errors as necessary to deliver the promised 99% accuracy. Adaptive machine learning algorithms “learn” from those and previous sessions to improve the engine’s accuracy, basically perfecting it with each task.

Also, the company tailors and retrains its system for every new customer based on their specific needs and contexts. Hence, it comes as no surprise that it recently raised $31 million in Series B funding to further expand its services and include more languages and verticals. So far, so good for Verbit.

There are a couple of reasons why I’m keeping an eye on Decodea. First off, the company’s co-founder Zeev Fine is brilliant and one of Israel’s foremost experts in AI. I truly believe in his skills and the skills of the team.

The underlying technology is a unique and novel occurrence in the world of AI applications: modeling human reasoning and incorporating in-house algorithms with existing AI systems.

AI is made for providing answers to questions humans have difficulties answering but it does so without offering how it came to those answers. What guys at Decodea did is add another layer to the contemporary AI named Explainable AI that offers an explanation about the logic behind a certain AI-made decision. In doing so, the AI itself is taken to another level by imitating humans’ ability to rationalize, reducing machine learning times, and improving algorithm robustness.

The company offered proof of concept based on chess, where human reasoning in complex situations is more than evident. Called DecodeChess, the software auto-explains chess moves, helping players sharpen their thinking and uncover new possibilities.

The idea is to apply this technology in different application areas where there is a need for understanding the actions of AI, enabling better judgment of the situation. DecodeChess is a great start and I’m very excited about seeing what’s next for Decodea.

First off – another vote for Verbit.

I’m a big fan of Lilium. It seems every borderline-innovative company wants to be the “Uber of something” but I can safely say Lilium will be the ‘Uber of skies’. It’s a German-based startup developing an on-demand air taxi service that has all the potential to be revolutionary.

I’ve been following the company for a couple of years now and it’s one of the most promising startups out there. The plan is to have a fleet of electric-powered vehicles ferry passengers in traffic-heavy metropolitan areas (the oft-used example is taxiing between Manhattan and JFK) within the next four to five years.

Due to numerous challenges (limited battery technology, commercial viability of flights, engineering and technical hurdles), the company is a long way from establishing a regular commute. However, it has recently made a huge step toward taxifying air travel by successfully completing the 3-minute test flight so it’ll be very interesting to see the progress in 2020. They will be there, I’m pretty sure of it.

Also – the company managed to snatch more than $100 million in financing so they must be doing something right, right?

I’m generally interested in foodtech and whenever there’s something about Beyond Meat, it immediately catches my attention. It’s an incredibly smart idea to produce plant-based meat substitutes designed to simulate chicken, beef, and pork sausage.

On a global basis, I’m having a hard time envisioning how we can continue consuming meat. Apart from climate change, water scarcity is largely impacted by raising cattle. The growing human population and demand for animal products will increase water demand, and that’s where Beyond Meat’s biggest advantage lies.

For vegetarians and those in the making (myself included), the company not only hits that high emotional note of not eating meat but also delivering a product that has the same taste, smell, and texture. There’s virtually no difference – it’s as close to the real thing as it can get, which is why the company’s IPO was a great success and why its shares are priced very high.

The way I see it, this is a far more important issue than having autonomous vehicles or any other shiny new thing that’s up for purchase. I’m hoping this trend isn’t a fad and that the ability to manufacture at scale goes global.

Count me as a fan of Beyond Meat too (and any similar foodtech company, for that matter) because of their unique challenges: making artificial meat (basically, declaring war to one of the biggest industries in the world) and changing a basic human habit.

My first choice is going to be an obvious one but I feel there’s so much that can be learned from Tesla that it’s hard for me not to notice certain things. There’s a similar notion of taking on a huge automotive industry and going against it, only I think 2020 will start to show tiny cracks in Tesla’s foundation.

I don’t think it’s because of the size of the industry and market or the people who are against it. It’s because Musk is promising too much. He’s amazing but he gives me this vibe of being a trailblazer who’s ultimately not going to succeed in his mission. I have a feeling that Tesla is going to educate and help the next generation of companies who are going to succeed but they need that one crazy dude to fail and show them the way.

At least that’s my gut feeling. I love his passion and his logical approach – he is going to be regarded as a visionary because of whom certain things happened. At the end of the day, that’s far more than what most of us can ever (hope to) achieve.

Moving on from accelerating the world’s sustainable energy efforts to Bosco: an AI-powered parenting app that predicts and prevents threats to children.

The big problem of being a child today is bullying but even that has “advanced” from the bullying of my generation and those before it. Today, it’s trolling on the Internet and sexually predatory behavior as the major ones. There’s no shortage of troubling content online so cyber-bullying is pretty much a constant threat.

As a father of two little boys who are not yet at the smartphone level (because every kid that can read has one), I particularly understand the seriousness of the situation. Having an app that sends notifications with information and insights about your kid’s activity instead of actual data itself (compiled from mobile activity, location, and social networks) is really innovative and useful. You don’t want to get into the privacy of a child but on the other hand, you want to keep them safe and that’s why the Bosco app is great.

It’s not as groundbreaking as most of the companies listed here but child security will only continue to rise in importance, seeing as the kids up to the age of 18 spend five to six hours netto on the phone a day. That’s the type of world we are living in and I see Bosco and similar companies accumulating a lot of traction because of it.