Content creation for the digital age: an interview with Tom Goldwasser, the visual identity of Project OUT 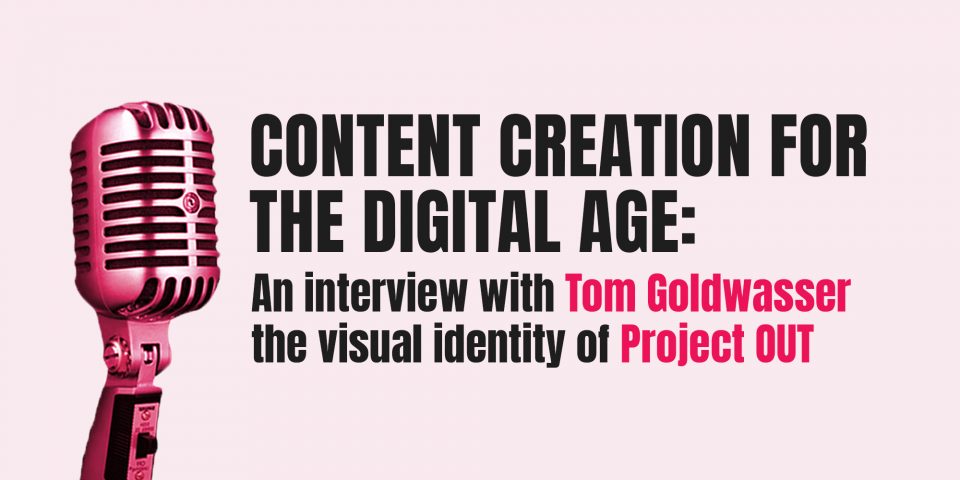 There has never been more room for sharing one’s creativity and unique ideas with the world than now. This particularly holds true for video, the most powerful form of content. However, it’s not enough to just tell a story. Without some kind of purpose or storyline, whatever you shoot will fall flat.

To get some direction for video content creation in the digital age, we’ve sat down with Tom Goldwasser, one of the guys behind the Project OUT. The project is envisioned as a series of short films that have a specific goal: to raise awareness about the impact of technology on our everyday privacy. Tom explains what really happens behind the camera.

Tell us a little bit about Project OUT.

In essence, it’s about an everyday person – you, me, our families, friends – at the center against the backdrop of technology and the establishment. It’s about individual freedom and how it’s slowly starting to diminish. There’s very little done at the moment to protect an individual’s data, both from the platforms that provide these individuals the opportunity to share their content and the government. Our videos address this issue in a no-nonsense, thought-provoking way.

So far, there are two videos out: ‘New world (pizza) order’ and ‘Dark pasta’, and we’re working on getting the third one out soon. We are a small but dedicated team, with the actor Oshri Cohen leading the project by directing (and acting in the first film), an editor, sound man, and myself as the cinematographer. M51’s CEO Ronen Menipaz is producing the videos.

Take us through the behind-the-scenes process.

Oshri wrote the script for the first video which is about a guy trying to order a pizza via smart voice technology but soon realizes there’s a lot more tied to it. He knew that he wanted to create a certain type of suspense but didn’t really have the visual angle sorted out. So, I was a bit more involved in the script than usual in the sense that I provided the rhythm of the film.

The rhythm is generally built during editing but you need to think about it when you’re shooting. In ‘New world (pizza) order’, it was about what is the actor (Oshri) going to do with his hands, where he is going to walk, what is he going to look at, and so on. Those little things can add a lot to the script without really having to change it. Up until that point, the script was a story. Once you start bringing pictures into context with the words, it becomes a movie.

With ‘New world (pizza) order’, it was harder to control the light because of all the big windows in the apartment. For ‘Dark pasta’, which is about a limited use of energy imposed by the government to fight an approaching asteroid, we had to block a lot of light with black wraps to make the atmosphere moodier. There was generally more work involved because of all the food involved, we used candles, and we had to constantly turn the lights on and off. There was quite a bit of additional work in post-production.

A cinematographer is responsible for creating the look, color, lighting, and framing of every single shot. So, my job is to tell a story visually. Naturally, you need the dialogue most of the time so the viewers have the full picture and I’m trying to add another level to it with the cinematography. A lot goes into how you capture something, from lighting, framing, and camera motion to focus, color, exposure, and so on.

Basically, it’s about aligning every visual element with an editor to create a beautiful picture, which is particularly important with an engaging subject matter such as Project OUT’s.

As a cinematographer, how do you make sure such a specific message – the government’s and technology’s violation of privacy – has the most impact?

In this digital age we live in, arguably the most important thing is to focus on where the content will be viewed. The first thing I do is think of my framing for the specific medium. Each has its unique advantages and disadvantages.

For example, if I’m making a video for TV and other big-screen media, I might do wider and open shots in order for characters to get a bigger presence on the screen. The context or the understanding of the scene is based around preceding or subsequent shots, which draws attention to off-screen elements.

In digital media where screens are smaller, I tend to do more closed shots so that the details of the scene are a bit clearer. Such a way of framing allows me to stress the importance of whatever is going on in the scene, plus it creates a stronger emotional response.

Keep in mind that things are changing fast. Now, we have smart TVs and you can easily watch YouTube and such on a large screen so the “rules” mesh together depending on the needs of the story. Still, filming for specific media should be the main goal.

It seems that both videos fared really well, reaching a viral-like level.

I was very surprised to see the videos getting so much attention. There are so many things going on right now and people are dealing with their own problems. I wasn’t sure if they would have the energy to watch 5-6 minutes of something they aren’t really familiar with. I was afraid they’d think we took it too far but it seems we balanced it nicely.

With that in mind – how do you stand out among all the content out there?

That’s a question I ask myself every day.

You can’t please everybody, that’s just a waste of time. I firmly believe there is an audience for everyone out there so you should do stuff that you would want to watch. That’s my conclusion and that’s exactly what we are doing with Project OUT: talking about things we feel strongly about and would like to see more of.

From a job perspective, I feel like it has more to do with who you are as a person and less with how talented you are.

It’s how you work within a team, how you work with your director or your producer in bringing their vision to life. If you succeed in doing that in a professional and comfortable manner as a human being, then people will want to work with you again. About 70% of this job is about who you are as a human being and the rest is the quality of your work. That is my experience so far.

To those interested in a more serious approach to video content creation, what advice would you give?

Read a lot, watch a lot online, and try to emulate it to a certain degree. That’s what I do. Every time I see an idea from a cinematographer, regardless of how big or small it is, I try to find a way to implement it in the project I’m working on or the one after that. It doesn’t have to be a 100% realization because you likely won’t have the necessary budget or the proper lighting but try to understand the concept behind it so you can maximize its value.

Always think outside of the box. For inspiration, check out Roger Deakins’ work. He’s my favorite cinematographer because he’s able to create really intricate setups but also very simple ones that anybody can replicate and get almost the same effect. Don’t hold yourself back just because you don’t have the budget to do it.

You can check out more of Tom’s work here.